After our first overnight stop at Moodini Bluff (East of Madura) with lots of other free loaders, we set off to cross into South Australia and travel along the Great Australian Bight. We were very lucky with our travel day as the top temperature only got as high as 27 degrees so we didn’t have to battle the extreme temperatures that were expected in Perth and Kalgoorlie.

As we put more kilometers between us and Moodini Bluff the winds picked up and we had to slow down to 80kms per hour to keep the car on the road. The landscape changed a little over time but it was mostly salt bush with no trees. In other parts there were small trees. We even travelled along a range of hills called the Hampton Tablelands, this is where the eagles must have come from.

We spotted one snake that was quickly retreating back to the edge of the road when he heard us coming but I think we hit him, two eagles scavenging a dead roo, a bob tail , a dingo, some sheep when we got close to Ceduna plus small birds especially crows. Wildlife definitely not easily seen on any of our days travel so far.
We had our nightspot all picked out but the South Australian road crew do not give you enough warning – about 300m warning to the turn off – they need to try stopping a van in that sort of distance. We are much better at this in WA – we give 1 km warnings, then 500m, then 300m – ample warning to slow down and turn in. All SA offers is a cut into the bush to park, no toilets or water. Hence our overnight stop ended up being the. Caravan park in Ceduna. We had a drink watching the sun set over the ocean.
Tomorrow morning we will have a walk in town, stock up on some fruit and veg and set off for our next free part on the eastern side of Port Augusta. 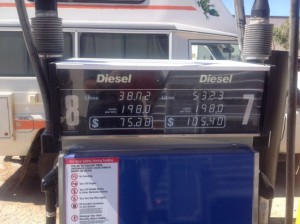 Wombat Sign – we are definitely in South Australia – where is Edward Pollards and Tina Turner! 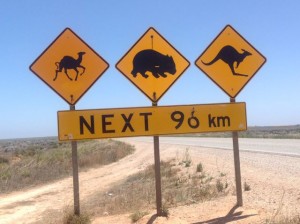 Since we began our travels we had not had a caravan shake when big trucks passed us – not so today. The longer we were on the road the shakier it became but not dangerously so, especially when open trucks passed us like car carriers. 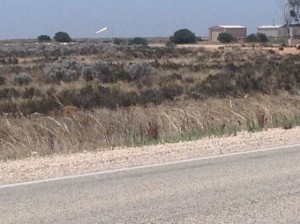 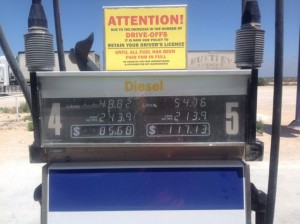 Leave a Reply to Chanel Click here to cancel reply.