Never having been to Newcastle there are four things that I distinctly remember over time:- 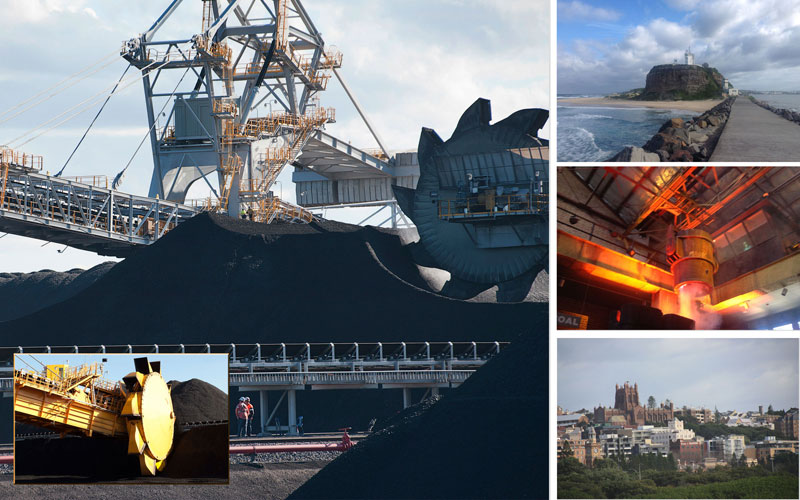 In 1995 an unknown steelworker from Newcastle took the art form made famous by tap dancers and turned it on its toes. Since then Dein Perry and his show, Tap Dogs, have enjoyed huge international success. Dein Perry grew up in Newcastle, he left school when I was 16, got a job in the steelworks. They didn’t finish work until the sun come up, they didn’t start till about 11 o’clock at night, and there was plenty of time to dream – well, not dream – the mills shut and they had to think about what else he could do with his life. The only other thing he knew was dancing. The rest is history 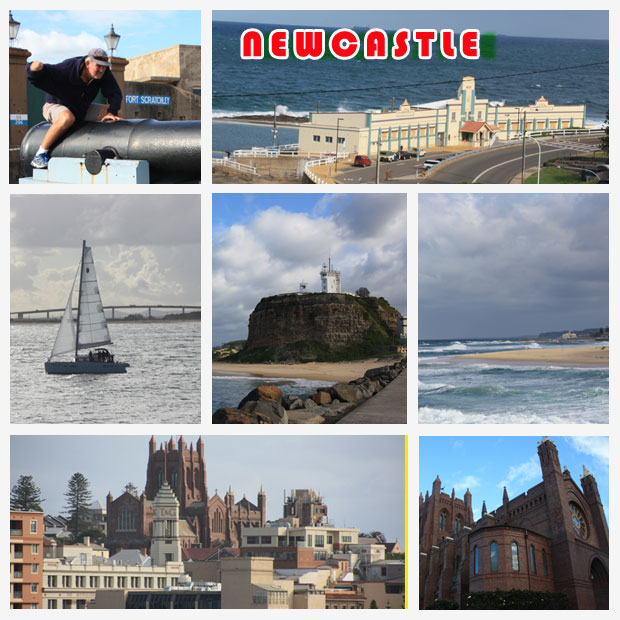 Perched between a working harbour and beautiful beaches, Newcastle is a vibrant city, with a rich history, Famous for its coal, it is the largest coal exporting harbour in the world. The emerging food scene in Newcastle is evident in the great restaurants, bars and outdoor cafes around the city. We chose one of the many harbourside restaurants at Honeysuckle to be our base. 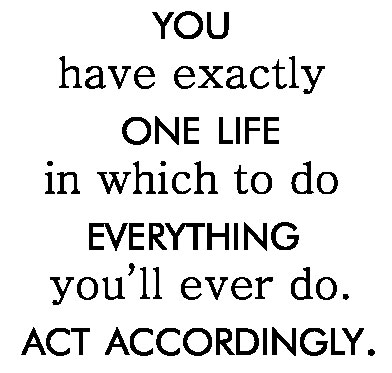 Our visit to Newcastle reinforced in our belief of staying in touch with people and making the effort to reconnect. Given that we are travelling and have time on our side, this sounds easy but you just need to make that special effort. Apart from seeing the diversity of the city with magnificent beaches and old buildings our story here was about people. We had a great few days combining history, food, friendship and fun across the region. 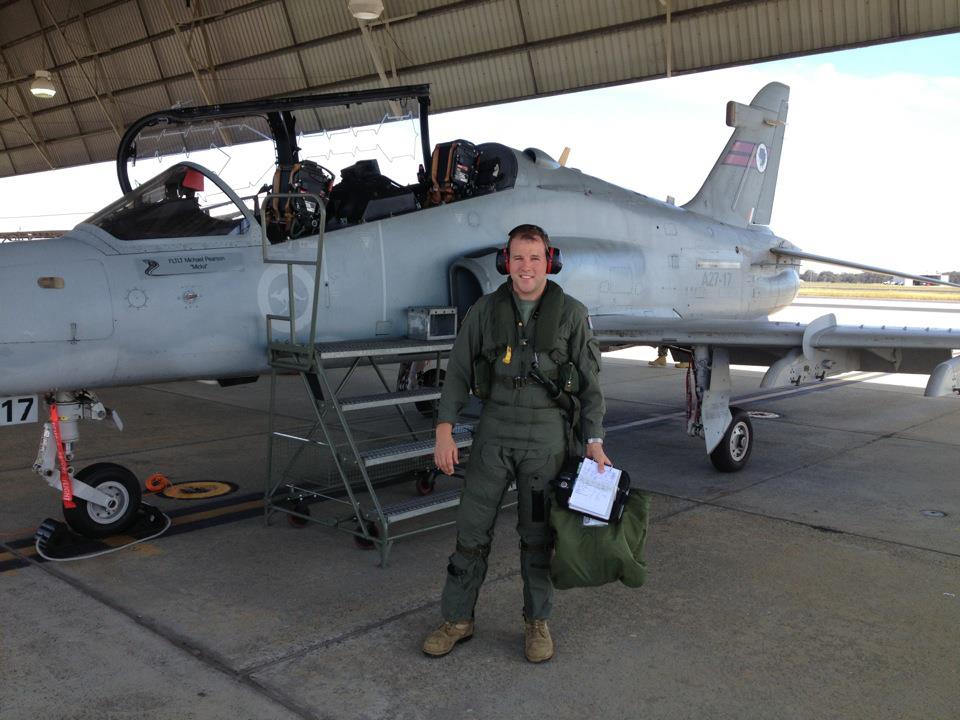 Kim hails from Perth Western Australia and his work a jet pilot in the RAAF summarises this young man extremely well. ‘A JET’ I was lucky to teach at Sacred Heart College in Sorrento, in my last year there, Kim was the head boy, his dad Andy was also on staff (another great guy – but too far to go and visit him in Darwin this trip). This guy has always treated Julie and I as ‘mates’ – he remembers his West Aussie upbringing and one day could be defending you and I in his job. Another plug for Facebook – Kim noticed Julie and I in Tamworth way back in January – he commented if you come close to Newcastle way give me a bell …. the rest is history.

No 2 – June
How many of us have had the pleasure of sharing your mate’s mums 79th birthday – all to yourselves. Julie and I managed to meet up with June and share an outstanding day as she celebrated 79 years at the Newcastle Museum (a must do and I am not a museum person) and then later down at Silos on the wharf. Bouquets to June, at 79 still as sharp as tack as agile as they come with a great story to share and energy to care for the family. 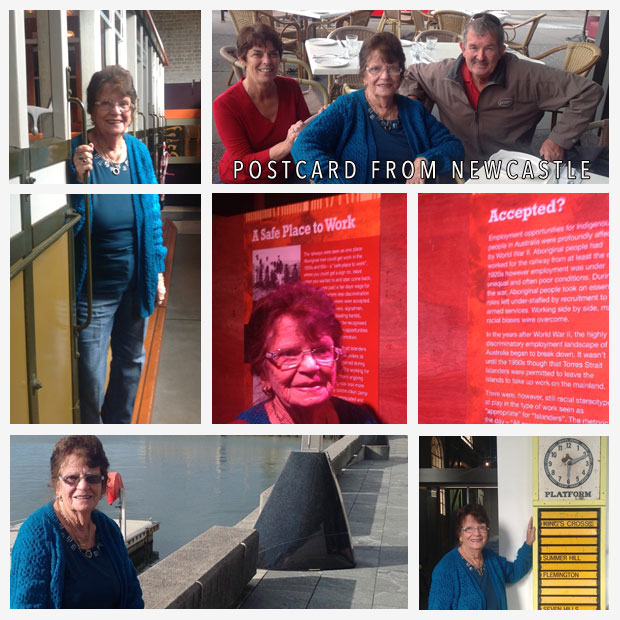 No 3 – Paul Greaves
Have you heard of Lochinvar – seriously Julie and I photographed the town in three shots. Some 45 kilometres from Newcastle – very close to Maitland in the Hunter Valley stands a town with a pub, the general shop and a Catholic school. There is a little bit more but not much. The Principal of Lochinvar All Saints College, St Joseph’s Campus is a friend of my current Principal Caroline Payne. On her advice I followed up Paul, made a special visit to his school and understood how he was rewarded with a Principalship after working at MacKillop Catholic College in Busselton and Bunbury Catholic College in senior roles. Now there’s a path many of my current colleagues wouldn’t consider possible. Paul is building a fantastic culture and a school with great facilities, in a school that has more students than people that live in the town. We took the time – we were rewarded. 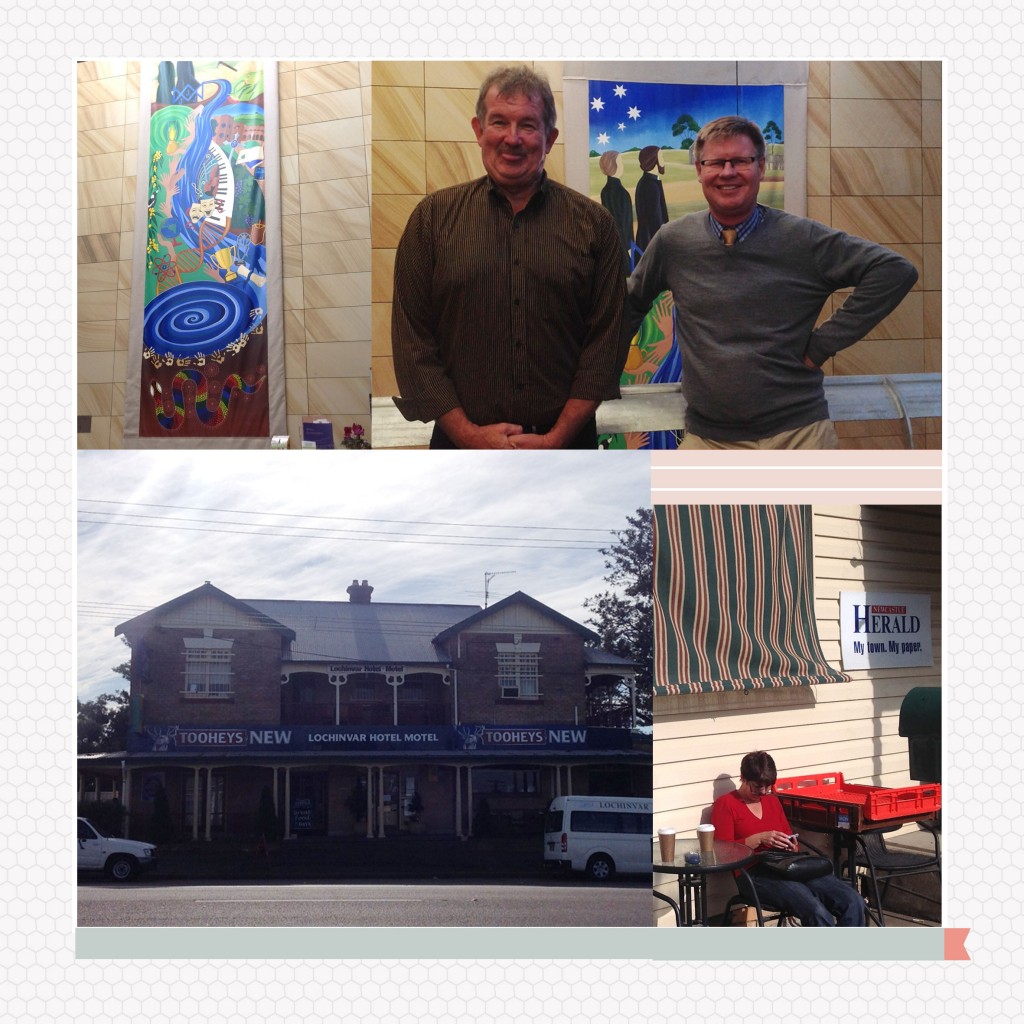 No 4 – Brendan and Cheryl McCormack and Murphy
In our last blog we issued a red alert the McCormack’s were nearby – we could have easily avoided these guys, Brendan made me get out of bed early in the morning, drive through heavy Newcastle traffic, basically bottomed the van out as I picked him up on the roadside in a Liquorland venue in a town called Belmont as his car was being serviced – drive him back to Budgewoi some 30 kilometres away – Brendan’s surf spot of the week and then he asks me to share my breakfast with Murphy (in the picture below) ……… Truth is we would have not missed the day at all. Brendan and Cheryl were both teachers with me at Corpus Christi College at some time. Cheryl also did her final year of schooling there as a student. Now living in Albany the McCormack’s 3 have a 9 month trip around Australia. Thank you again to Facebook, only connected up with Cheryl last weekend – we were 100km apart and on a collision course – as quick as we connected – met shared a great day – fine food – some drinking and lots of shared memories – Brendan and Cheryl are now at Bluey’s Beach near Forster (more surfing) and I am in Sydney. ps Budgewoi is a brilliant stop as well. Also its possible that our last stop on our trip may be Albany in WA just to catch up, make the effort and follow the journey. 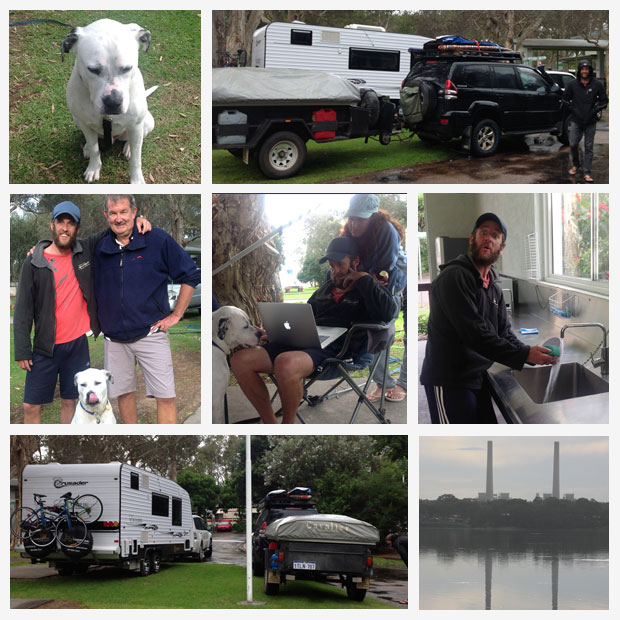 If it’s size of the beast that matters – I’ve got ‘The Stud’ covered.

If its how much hair is on your head I run a poor second! 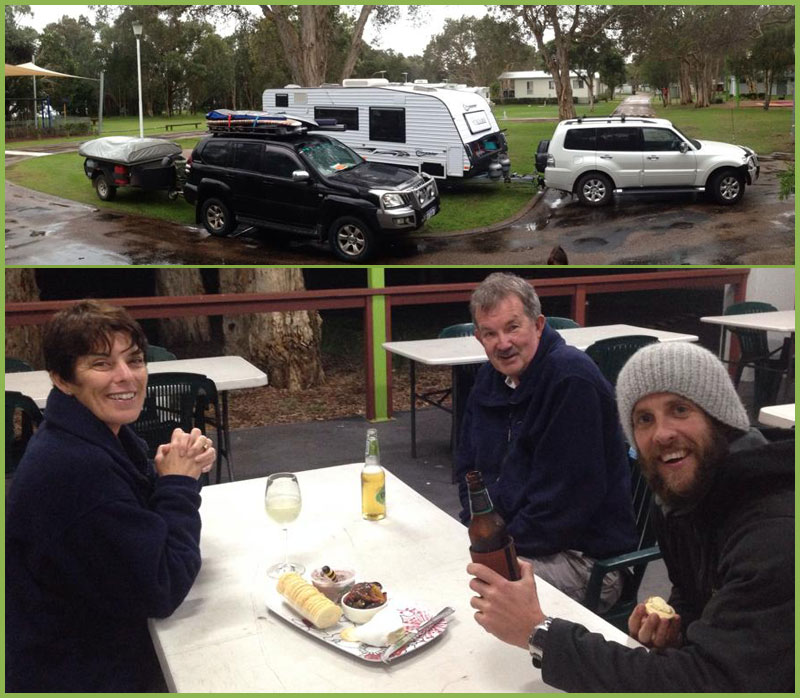 Julie – well she caught an early morning flight home to Perth to catch up with Itala and Dino – making the effort – I guess I can say I am armed, alone and dangerous in Sydney