More by Trevor Galbraith
Friday
Trying to keep pace with the Country Music Festival is like going to an ISTE Conference back in San Diego some time ago – you quickly learn you have to plan ahead – get to the gig ahead of time and be prepared to do some down time to get a good seat. As we are commuting in and out of town each day, even planning food and rest time is now taking shape. Today we opted for an afternoon trek to fit in two night time concerts – the rising stars won by Jared Porter who knocked off the West Aussie Jonny Taylor who got my votes 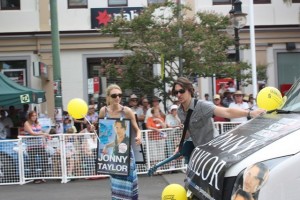 Jonny Taylor from Pinjarra WA
– and then the big gun Lee Kernaghan – they blasted the socks off Tamworth. Trevor G was one of the few contributors to the live twitter feed throughout the concert. If you are coming this way get up to day with a tweet or two. 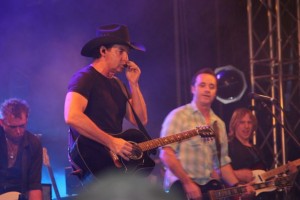 In the afternoon we got to see some real Aussie talent and throw in a Yank with a Johnny Cash voice and we were doing some toe tapping.Ccheck out these names Amy Joy Poulter – Sara Storer – Doug McIntyre (similar to John Williamson) and you can understand that Australia has real talent. Buddy Goode was a poor mans’ Kevin Bloody Wilson – took in a bit of his show. 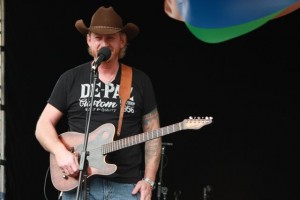 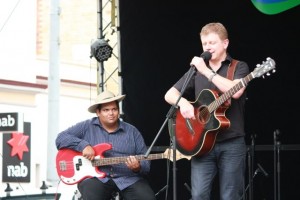 John Stone USA – real good voice and Doug McIntyre – good Aussie Country Music Performer
Again the buskers were from young to old – they catered for someone’s needs. Tamworth is give it a go country – just like schools should be – just give it your best. A sidelight yesterday was when watching Murphy’s Pigs a big group of young adults with special needs just let rip and were dancing in the aisles. So similar to what Mike and Derek have been doing with the kids at Corpus for honks. admiring their lack of inhibition and enjoying then for their abilities to have. Go.
Saturday 25 Jan
An early morning start so that we could get to see the cavalcade dedicated to Slim Dusty. We got there and found a watch position 10 minutes before the start. There were 100 floats with all the different performers. Some floats were just the singer standing or sitting on the back others went the whole hog by decorating their float and singing songs by Slim. The streets were lined with thousands. During our time in Tamworth so far we had not seen such big crowds- the town buzzed all day long. 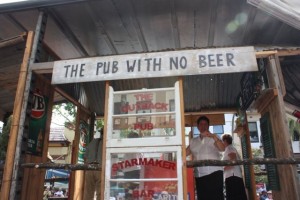 We managed to see Brothers 3 who we will rave about for a long time. They are three brother aged 16, 17 and 18. What a talent from kids so young and they have been at Tamworth for 4 years already. Their mum played the drums while they performed and then sang ‘The Rose’. Wow! Bette Middler could hardly do it so well.

We also made a special effort to see ‘The Bushwackers’. Others on the menu today were Pixie Jenkins a Legend of Tamworth (fidler) and Rory Ellis. All in all another great day in Tamworth.
Tomorrow we move our van to Kootingal Caravan Park (only 18 km the other side of Tamworth) as the Nelson’s need to head home and we do not want to overstay our welcome here in Quirindi. Tony is a teacher he has to be at work Tuesday (sigh! poor old bugger).
We intend seeing the Brothers 3 again and go to the Australia Day concert. Should be a great day.