Julie and I have just spent an exhilarating week walking the different trails in The Grampians.

Firstly Halls Gap was a great base. The Caravan Park was the perfect spot. Often joined at meal time by loads of cockatoos, kangaroos a plenty – peace promised – rain came and went, the weather was on our side – groups of school kids continuously arrived for various outdoor education camps and as the week progressed we became more adventurous in our treks.

We made a visit to the famous track at Stawell where the Easter Gift has been held on an annual basis for more than 100 years. Great nostalgia in the museum reliving Australia’s footrace.

It was then off to the lookouts high in the Grampians and setting ourselves daily goals to keep going higher and longer. The older we get, I guess the more bullet proof we think we are. Day 7 in the Grampians and I talked Julie Galbraith into doing the circuit walk (says only experienced walkers) – midday and we have reached Lakeview Lookout – simply up up up and more up – next stop Sundial Peak, conquered then v-lined to the Pinnacle, achieved lunch great views, back slapping photos etc, only the downhill descent.

Holy shit – we derailed badly on the descent under my bulldog leadership – we missed a marker and instead of returning (up hill to our last contact) I assumed wrongly that we would keep going and reconnect. Unfortunately that didn’t happen – we had to cut through virgin bush, wife suggesting a divorce – the next hour was tense after many hours on the trail – I should not have put us in this position – the rest is history, just as the sun was heading behind the mountains we staggered upon a trail – an hour later we are in town before sunset – bloodied and exhausted – with ice creams in hand. Lesson learnt and if you read this – learn from my mistake. Stick to the trail – the unchartered path is not a solution.

Great place – ranks along side Carnarvon Gorge as a total walk experience. 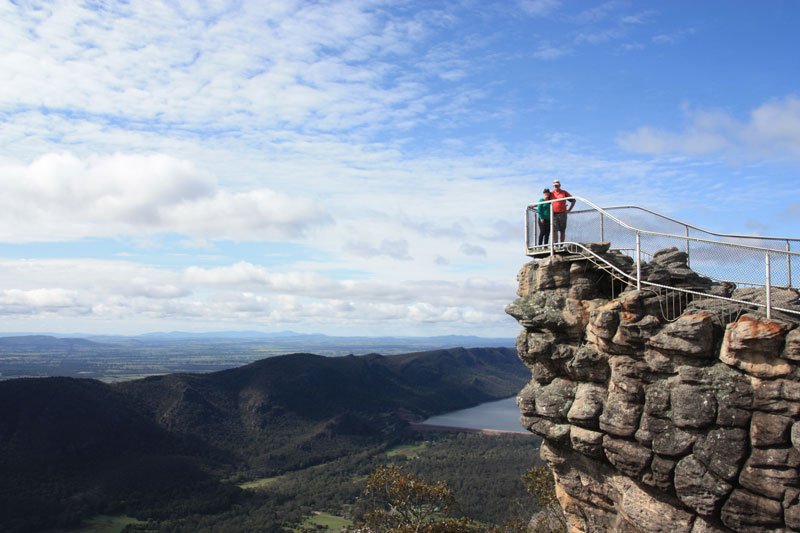 Enroute to the Barossa in South Australia we took in a semi final in the Wimmerra AFL League played in Nhill. Picture perfect ground and beautiful weather was the order of the day. Country football reminds me very much of our days growing up in Kalgoorlie. The whole community is one place celebrating what it is about being a country folk. Victorians are keen – there were 100’s of Richmond supporters passing us on the way to Adelaide unfortunately to be disappointed.